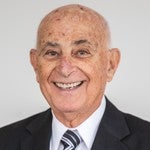 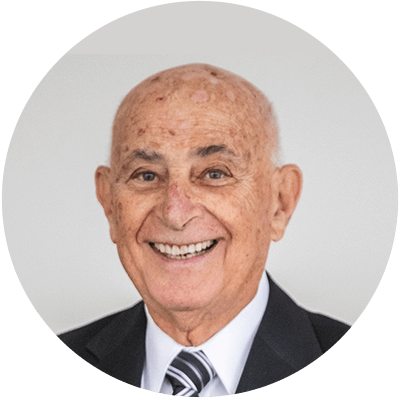 After over 50 years of representing injury victims, Mr. Greenberg passed away on June 9th, 2021. He left behind his beautiful wife Diane, daughters, and four grandchildren. His presence and contributions to Greenberg & Ruby, LLP will be missed, and his impact on all of the lives here at the firm will never be forgotten.

Mr. Greenberg was aware of his failing health and left the firm with full confidence in his partner, attorney Emily Ruby. The transition to placing Mrs. Ruby in charge was a multi-year process, and, as evidenced by the growth of the firm in results and customer service during that time, Mr. Greenberg was confident that his legacy and commitment to superior representation would be carried on.

David has taught me so much during our time together and his presence will be sorely missed. I lost my mentor and my friend, but the confidence he placed in me over the last few years to run the firm prepared me to carry on his legacy. If you can hear me, David, thank you for everything. We won't let you down. - Attorney Emily Ruby

"Emily is the best attorney I've ever met, and I've worked with countless attorneys. She has done a great job running the firm over the last few years and I know she will continue to do so long after I've retired." - Attorney David Greenberg

Mr. Greenberg grew up in poverty on the east coast of the United States. Throughout his upbringing, Mr. Greenberg was often the target of antisemitic behavior perpetrated by teenagers throughout his neighborhood. He credited his struggles to overcome his difficult, humble beginnings for developing his relentless dedication to fighting for injury victims:

I grew up back east as a small, poor Jewish boy. There was a lot of antisemitism back then, and other kids would take advantage of any situation in which they could pick on me and call me names because I was Jewish. Without a big brother or anyone to defend me, I was beaten up by bigger kids every day and would have to come home in shambles to my concerned, inquisitive mother.

“Why do you insist on fighting back?”, my mother would say. “Why don't you just run away?”.

I did not know it then, but running away is not an option for me. I'm a fighter.

I would not run away from bigger, meaner boys, even if that meant I was going to get beat up. I firmly believed that if I could hit them once for every three or four times they hit me, I would eventually win. My efforts and dedication eventually did pay off, and, after some very difficult years, I showed them I was not afraid to fight and my neighborhood accepted me as someone that would not be pushed around.

The lessons I learned on my neighborhood battlegrounds protected me as a child, and I turned to those lessons throughout my service in the United States Army.

After I got out of the Army, I moved to Los Angeles and began work at an employment agency. It was a different time, when racial and religious bigotry were smiled upon by company hire-ups, and my position at the time gave me unique insights as to the extent of the issue. They told us which employers would not hire black, Hispanic, or Jewish employees, and we were instructed to write on job intake forms “HTCC” when a potential hire met these employers' “needs”. ‘HTTC” meant high type and clean cut, but myself and my coworkers knew it was a catch phrase for no blacks, Hispanics or Jews.

This was another defining moment for me. The system was unfair and biased towards myself and countless others, and no-one was going to fight for me to receive my fair share of the American dream, I realized I'd need to fight like hell to make it in this world.

So, I enrolled in evening law school, changed jobs, and for four years worked days and went to school at night, studying any chance I could get to help ensure I'd receive top honors and become an attorney.

At first I represented anyone who came to me for help, but once I had represented a few personal injury victims, and I saw with my own eyes that the real defendant on the other side was a greedy, billion dollar insurance company with giant law firms, I knew this was a fight I wanted to be in for the rest of my legal career.

Injury victims remind me so much of myself, I couldn't help but feel passionate about representing them. When I was young, I needed someone to protect me from the large groups of big kids that were hell-bent on tormenting me, but I did not have anyonoe. As a work injury lawyer, I get to be the protector that I never had.

Back then, most of my clients were either black, Hispanic, women, children or poor people that could never afford to hire an attorney unless my fees were deducted from winnings I was able to secure for them. It was a very big risk, but it paid off.

Now, many years later, I have produced over 250 million dollars for my clients. I have been able to change their lives medically and financially. They have been able to hire the best medical care, buy their own homes and send their children to college. Some whose spouses died in terrible accidents have been able to permanently live comfortable lives utilizing the money I got them so they could stay home to take care of their children.

Insurance companies and big law firms know when they get a law suit from David Greenberg that they will be in a no holds barred, fight to the end. I have never been afraid to fight any insurance company or big law firm at any time or on any case I have taken. I'm a fighter, and I never stop fighting for my clients.

There's nothing I enjoy more than taking an ‘impossible' case and turning it into a significant win that can change a client's life forever. In my fifty years of practice, my most rewarding cases have been the ones where we fought a greedy insurance company who was determined not to pay a cent to our client, and won against all odds.

David H. Greenberg practiced law in the area of personal injury for over 50 years. Mr. Greenberg was held in high regard within the legal community; being named as one of Southern California's Super Lawyers from 2008 – 2020. In addition to being a published author, having written a number of law-related articles, he also had several articles written about him regarding his knowledge and experience in the law. Because of his vast knowledge and experience, many legal organizations asked Mr. Greenberg to appear at legal seminars and speak at lectures.

Mr. Greenberg handled thousands of work injury and personal injury cases. A few of his most successful cases include a trial verdict resulting in $10,000,000 awarded to his client for injury caused by the malpractice of a medical professional, a $6,500,000 verdict/settlement for motor vehicle accident resulting in wrongful death, a $6,100,000 settlement awarded to his client after suffering an on the job accident at a construction site, and two successful settlements of $3,550,000 and $2,100,000 for clients who suffered injury and damages as the result of a defective product. These successful cases, and many others like them, earned Mr. Greenberg the honorary title of “the people's attorney” among his clients as well as in the legal community.

Mr. Greenberg was the appellate attorney on multiple successful appeals, including the following: